Manchester’s Whitworth gallery has just reopened after a huge extension. The award-winning architecture studio, MUMA, were employed to extend the iconic Victorian art gallery to the rear and to transform the inside, expanding the space available to the public by nearly double. The theme of the changes is Manchester’s ‘gallery in the park’. So the café is now a long jetty of glass, jutting out in and among the trees of public Whitworth park and new promenades have been added around the building, swathed in reflective materials to bring the outside in. In terms of exhibitions, there is plenty of the Whitworth’s permanent collection of work on show. Look out for the textile collection in the entrance gallery, and iconic watercolours by J. M. W. Turner and William Blake. However, in line with Gallery Director Maria Balshaw’s minimal bent, there is a feeling of more space. To help you make the most of your visit, here are our top five must-sees.

Chinese artist Cai Guo-Qiang is known for his work with explosives, having directed fireworks and ‘black lighting’ under the view of the sun in events around the world - including the opening ceremony for the Beijing Olympics in 2008. Unmanned Nature (2008) was originally commissioned by the Hiroshima City Museum of Contemporary Art. The work is a large landscape scene, hewn from the remains that explosive charges leave behind. It is displayed around a large pool of water in the new Landscape Gallery, and this is the first time the work has been seen outside of Japan (Until 21 June 2015). 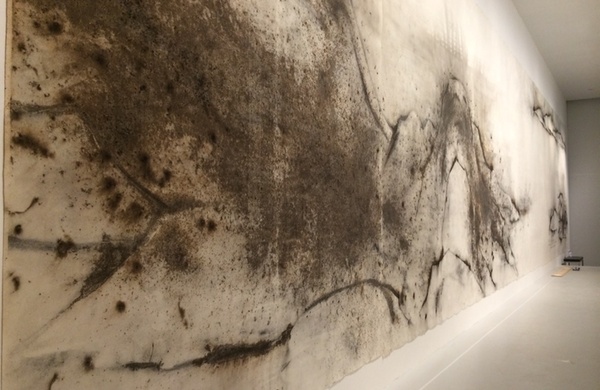 Cai Guo-Qiang’s Unmanned Nature at the Whitworth is created from the residue left behind by explosions.

The Café in the Park

Sounds a bit shallow, doesn’t it, focusing on a café with all that art to explore. But this is no ordinary space. It’s a polished, glass-clad extravaganza with views of the sun all the way through the day until sunset. The beer served is the Whitworth’s own pale ale, brewed by the local Tickety Brewery, and food like scones, salads, brunch and roasts from 8am til 9.30pm most days. Food is ethically sourced and served up by award-winning outfit, The Modern Caterer. Cakes are a highlight: the organic chocolate brownie has its own fan base.

The Turner Prize shortlistee enjoys her largest solo retrospective to date. Taking over three new galleries, which make up the rear half of the building, creations displayed include a flattened silver service dinner set suspended from the ceiling (from Thirty Pieces of Silver, 1988-9) and her famous Cold Dark Matter: An Exploded View (1991). This shed, caught mid-explosion, suspended exactly as it would be really has to be seen. There is a light at the core, shining out and casting crazy shadows through all the broken pieces, eliciting ‘wows’ from all and sundry There’s also a brand new commission called the War Room which is basically a huge ‘tent’ shaped space, created from the holes left behind in strips of red paper when Remembrance Day poppies are cut out. It nods to the damaging effects of war while providing a sumptuous visual spectacle. (Until 31 May 2015).

The Shop’s Modernist Homewares and Gifts

In line with contemporary gallery shops around the world, Whitworth sells new finds and cute things. From bags emblazoned with the words ‘Emotional Baggage’ to vintage West Germany pottery vases, cool cushions, ceramics, glasswear and more, there’s plenty here for the cool customer. Affordable art materials are a draw for the practically minded, as are the kids toys which include yoyos good enough to eat (not recommended).

Walking down the promenade gallery at the rear of the building down towards the staircase, visitors will find a large, rotating sculpture by multi-media artist David Batchelor. It looks a bit like a baby’s mobile on a grand scale as pink and iced pastel tones refract around the stairwell. This new commission by the Whitworth is called ‘Plato’s Disco’. (Ongoing).