Prague: 1-3 Nights for Two with Breakfast and Spa at the 4* Hotel Don Giovanni

The four-star Hotel Don Giovanni Prague awaits travellers just a short metro ride from the heart of the city. The hotel offers on-site leisure facilities such as a beauty salon, spa and wellness centre, while one of the city’s biggest shopping malls is located nearby.

Guests can unwind in air-conditioned rooms which are decorated with attention to details and feature HD TVs, hot drink-making facilities, and en suite bathrooms with hairdryers.

A vast range of international cuisine choices, traditional Czech specialities, and a la carte dishes can be savoured at the on-site restaurants, while various drinks overflow at the hotel’s bars. Located on the 12th floor, the Executive Lounge boasts a roof terrace with panoramic views of the city.

The capital city of the historic Bohemia region, Prague is one of the most popular destinations in Central Europe. Mirroring in the River Vltava, the city has been alluring visitors with numerous bridges, cathedrals, and gold-tipped towers for more than 10 centuries. Travellers can embrace the medieval charm of the city while strolling through the winding cobblestone alleyways with red slate rooftops and historic quarters of the Old Town, indulge in the panoramic views of the city from the 9th-century castle or catch a traditional puppet performance at the National Marionette Theatre. Various restaurants tempt the senses with hearty Czech cuisine and local beer, while the new town offers an array of high-fashion shops, clubs and entertainment options.

The weather in Prague varies according to the four seasons. Maximum temperatures during the warm summer season range between 22°C and 25°C, while during the winter months the temperatures drop to 1°C. Although summer brings the wettest time for the city, with more than 70mm of precipitations per month, the season witnesses more than seven hours of sunshine per day, making for suitable weather for leisurely activities and exploring the city sights.

Modifications can be made until 3 days before scheduled arrival. No cancellation allowed after booking confirmation. Bookings are non-refundable and non-transferable to another destination once confirmed.

Must book by 20 Dec 2021.
Booking recommended by phone: +420 222 231 548 or by email: hotel@hotelproduction.cz, and subject to availability. Please attach your voucher to the e-mail.
Limit 1 voucher per stay, may buy 4 additional vouchers as guests.

The hotel is located in Prague, Czechia.
Excluded city tax of approx. €0.9 (25 CZK) per night
No transfers included.
Valid for stay in an Executive Double Room for two people. 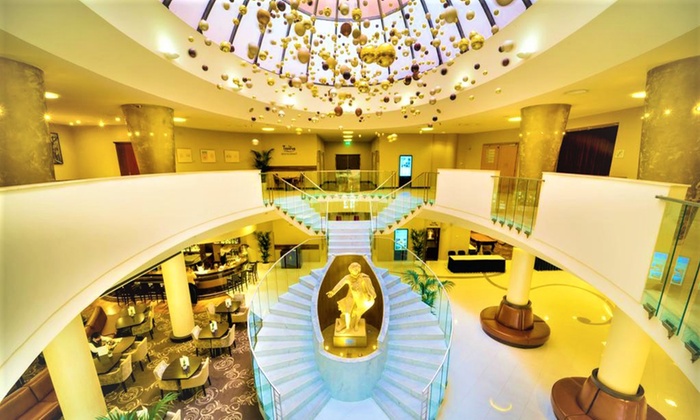 Prague: 1-3 Nights for Two with Breakfast and Spa at the 4* Hotel Don Giovanni