Option 1: stay in a Standard Room

Built in 1894 from locally extracted and handcrafted granite, Housel Bay Hotel boasts a historic character and panoramic views of the Cornish coastline and countryside of the Lizard Peninsula.

Guests can access the South West Coastal Path from the garden of the hotel and after walking the paths and breathing in the fresh sea air, they can relax in en suite rooms that come with flat-screen televisions, hairdryers and tea and coffee making facilities. There are panoramic rooms which have wall to wall views of the sea and Cornish coastline as well as rooms with sea, partial sea or country view only.

Housel Bay Hotel has two restaurants offering a taste of Cornwall, one of which has been awarded 2 Rosettes. There’s also a bar with signature cocktails, West Country Gins and bite-size nibbles.

From Bude to Land’s End, Cornwall encompasses everything from chocolate-box villages to vast Atlantic coastlines and vibrant surfing hubs. As residents are rarely more than a half-hour drive from the sea, there’s no surprise it plays a huge part to Cornish life, with busy harbours and Michelin star awarded seafood restaurants allowing fish to go from boat to plate in 24 hours.

With clubs, bars, and extreme sports, Newquay has plenty to offer for a youthful crowd, while family-friendly Falmouth has more sheltered beaches and all-ages day outs such as the National Maritime Museum. Away from beach life, grown-up St Ives is an established arts centre, home to the Tate St Ives, Barbara Hepworth’s garden and a wealth of independent galleries. Inland a little, the Eden Project’s greenhouse biomes create spectacular tropical environs and an otherworldly, space-age feel. Visitors can also buy into the local legends on Bodmin Moor or hike along the rugged landscape to catch a glimpse of the fabled beast.

Modification can be made until 2 days before scheduled date of arrival and upon availabilities. No cancellation allowed after booking confirmation. Bookings are non-refundable and non-transferable to another destination once confirmed.

The hotel is located in Lizard, UK.
No city tax.
No transfers included.
Valid for stay in a Double Classic Standard Room or a Double Ocean View Room for 2 people. 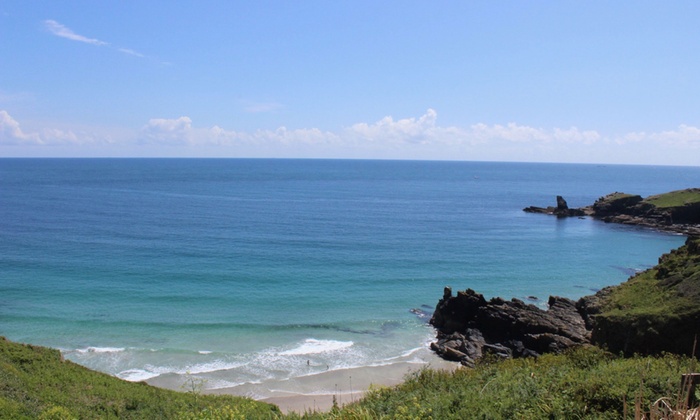