Experience the history of Britain in a new way with a ticket to open-air show dazzling with mass choreography, battles and pyrotechnics

Kynren: An Epic Tale of England

Known as one of the most spectacular open-air live shows in the UK, Kynren: An Epic Tale of England presents 2,000 years of the country’s history, myth and legend in one breathtaking show. Hosted at Flatts Farm in Bishop Auckland, it takes place on a vast stage with a lake hiding a host of surprises at its centre. Visitors are able to witness characters and events that shaped the country, especially the North East region, in 29 different scenes exhibiting events from the Roman occupation of Britain to World War II. With a cast and crew of 1,000 performing alongside the animals of Kynren, the scale of the show must be seen to be believed. Spectacular sets appear as if by magic, mass choreography and fierce battles are illuminated with dazzling special effects, lighting and pyrotechnics, set to a spine-tingling original score.

Validity: Valid on date and time specified on Groupon only.
Purchase: Limit 1 per person. May buy 9 additional as gifts.
Restrictions: Booking required by phone, please call 0333 300 3028, Mon-Fri 9am-7pm and Sat 9am-5pm; provide Groupon code. Present printed Groupon on arrival at least 1 hour before the performance. Customers are advised to book at least five days in advance to avoid disappointment. Groups wishing to sit together should have one person purchasing and booking the tickets. 14-day cancellation rights do not apply; no refunds or exchanges permitted. Must be 4 or older. Under 16s must be accompanied by an adult. Child ticket valid for 4s-11s. Young adult ticket valid for 12s-15s. Adult ticket valid for 16s and older. Shows start from 7:30pm onwards depending on show dates throughout summer 2018. Please check in advance on Kynren.com prior to arriving on site. Valid on option purchased only. For step-free access please contact the venue directly before purchase.
Original values: Verified using our merchant's website on 19 Jun 2018.

In and Around Bishop Auckland 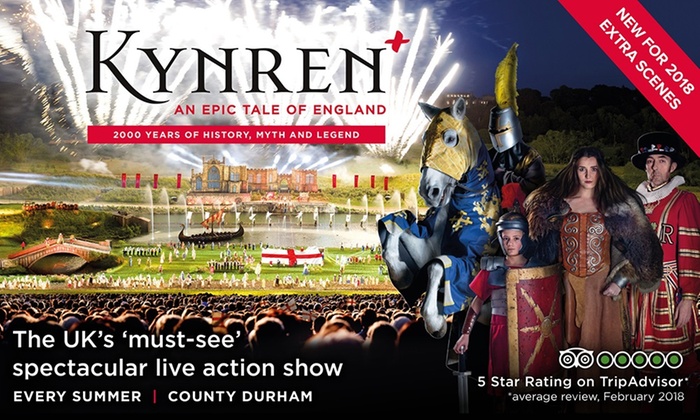