Every day is Mayday for the RNLI’s volunteer crews; the RNLI use all the money raised from these donations wherever the need is greatest

To join in on social media, use the hashtag #MaydayEveryday

From Tuesday 26 April to Monday 2 May, Mayday fundraising events will be taking place across the UK and Ireland to raise vital funds for the RNLI. From cake bakes and welly wanging competitions, to street collections, sponsored runs and wearing wellies to work, people will be doing all sorts of things to raise money for the lifesaving charity. Groupon is making it easier than ever to donate, by allowing those feeling charitable to give at the click of a button.

Donations can be from as little as £1 and the money will be used where ever the need is greatest within the RNLI.

Purchase: No limit on donations. May buy multiples. Restrictions: By purchasing this Groupon you are donating the underlying value to the charity; no further action required. 100% of funds raised are donated to RNLI Royal National Lifeboat Institution. RNLI Royal National Lifeboat Institution is a registered charity in England and Wales (209603) and Scotland (SC037736), and Registered charity number 20003326 in the Republic of Ireland, of West Quay Road, Poole, Dorset BH15 1HZ.

In 2015, the Royal National Lifeboat Institution’s (RNLI) volunteer lifeboat crews saved 348 lives and rescued 7,973 people – that’s an average of 23 people rescued every day. This coming May Day bank holiday weekend, the charity is issuing its own call for help. Through its national annual fundraising event, Mayday, the RNLI is calling on people to show their support to help the charity’s lifeboat crews carry on saving lives. Every day is Mayday for the RNLI’s lifeboat crews, who are specially-trained volunteers, on-call 24/7 to save lives at sea. Whatever the weather, day or night, they are ready to drop everything and launch the lifeboats to rescue anyone in danger at sea around the coasts of the UK and Ireland. But, as a charity, the lifesaving service they provide is only possible thanks to the generous support of the public.

In and Around Poole 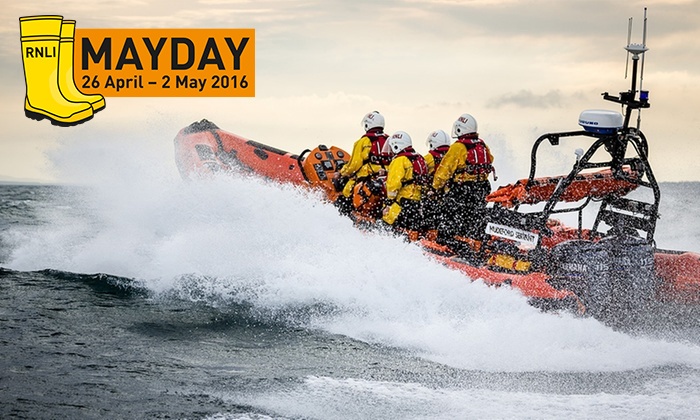