Traditional Irish Show and Three-Course Dinner for One, Two or Three at The Belvedere Hotel

5.01 ratings
5.0
Average of 1 ratings
100%
100% Verified Reviews
All reviews are from people who have redeemed deals with this merchant.
A
amie
1 ratings1 reviews
Food was great. Service was great. Entertainment was wonderful. Very fun night.
Helpful
Earned when a user has written 5 or more reviews
Want to earn this badge? Share 3 or more photos
Earned when a user has gotten 2 or more helpful votes

Irish culture and heritage is a source of pride and joy all around the world, with Irish dancing, singing, and general celebrations - St. Patrick’s Day, anyone? - being widely recognised and almost universally beloved. And where would be a better place to connect with one’s roots than the Irish soil itself? The Belvedere Hotel deal offers both locals and tourists alike to come together for a night of feasting and entertainment during a traditional folk show. There will be dancing, there will be singing, there will be grub and dessert - an all-around perfect evening indeed.

Offering both dining and non-dining option, this two-hour show deal is a brilliant idea for a date or a night out with friends. The dances include a journey through the history of Irish dancing, from the old style to the more modern choreography. Guests will be watching the star-studded cast with the likes of Riverdance and Lord of the Dance under their belt, and a history of performances at shows such as The Tonight Show with Jay Leno, Late Show with David Letterman, or Dancing with the Stars.

About The Belvedere Hotel

The Belvedere Hotel is located in the heart of Dublin city centre. It is only a short walk to the Gate theatre, the Garden of Remembrance, Croke Park stadium and the north end of O’Connell Street. It boasts 101 guest bed rooms and the visitors can attend live shows with traditional Irish music and dances. 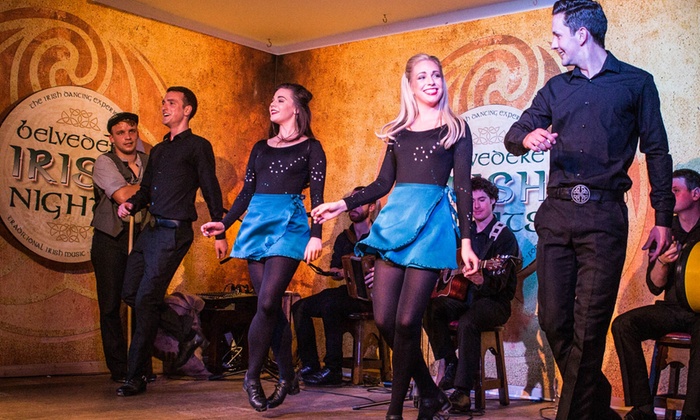 Traditional Irish Show and Three-Course Dinner for One, Two or Three at The Belvedere Hotel