Stumble Across: The Donegall Place Masts 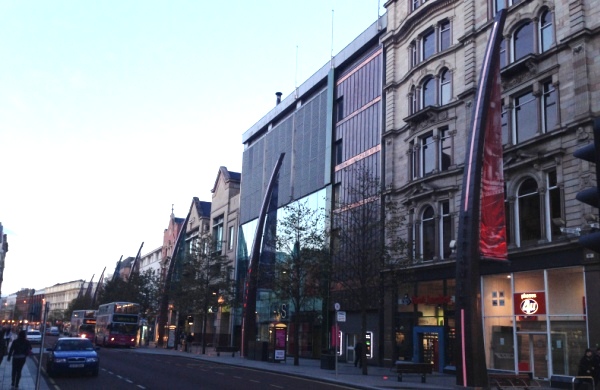 Residents and visitors to Belfast will have noticed that over the last few years the city centre is looking different. It’s no coincidence of course - multiple initiatives have been in place since the Belfast Agreement and St Andrews Agreement (1998 and 2006 respectively) to create a new shared environment.

The city centre’s change has come off the back of the Streets Ahead initiative which deals in large scale urban redevelopment for the city of Belfast. Those who have walked down Donegall Place in the city centre may have seen there have been some new additions to the thoroughfare. These additions are in the shape of the eight very large street lighted masts, complete with sails which run along one side of Donegall Place.

If you ask patrons along the street what they are, or what they represent, prepare yourself for a myriad of different answers, from ship bows, to ribs of ships, and finally masts. The official line of course is that these are masts and a celebration of the iconic ship building partnership of White Star Line and Harland and Wolff in Belfast.

Harland and Wolff is of course the company that built the lauded Belfast shipyards which supplied ships all over the world. Harland and Wolff built the three most well known ships of the White Star Line’s trio, RMS Olympic, RMS Britannic and RMS Titanic. The masts celebrate this partnership with the names of each of the ships emblazoned on the masts and an accompanying plaque laid in the ground at the base of the mast. The plaques give the reader the history of the named ship on the mast. Included are the commission of the ships, the purpose, weight and relevant dates. 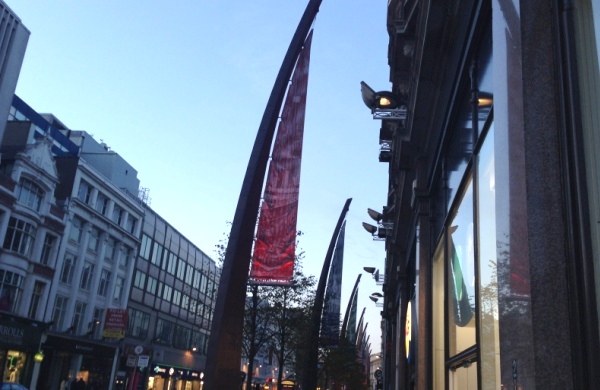 The builders of the masts, Atkins, took their inspiration for the structures from the rich maritime history of the cit. The City Hall was also a facet in the process as the copper cladding on the dome of the structure is echoed in the masts which expressively age and green with the copper evoking the colour of the sea. The overall effect is like a ship graveyard of sorts with the ribs jutting through the stone pavements. It looks as though the town has been built around a shipwreck. It is a very evocative and emotional installation for many who are connected to ship building in Northern Ireland. The masts were designed and built in Northern Ireland, using cutting edge LED technology but also local craftsmanship to pair the old and the new, evoke history but also push toward a cutting edge cityscape.

It is very worthwhile noting that the sails which fly from the masts are changed based on events which are taking place in Belfast. The sails which are lit in the evening depict historical scenes from industry and shipbuilding - many depict the building of the named ships on their masts. When walking passed do look upward and check the sails as they are funded by the Northern Ireland Tourist Board and will often be changed based on events which are happening within the city - like maritime notice boards!

Read more on Streets Ahead Development.

Monuments and Memorials in the Gardens of Belfast City Hall

Explore Belfast - check out our deals for things to do in Belfast.