The Modern Slavery Act 2015 (the “Act”) is an Act of the Parliament of the United Kingdom. It is designed to tackle slavery in the UK, and consolidates previous offences relating to human trafficking and slavery. The Act also introduced a new corporate reporting obligation requiring companies that qualify to set out the steps they are taking to tackle modern slavery issues in their businesses and supply chains. Groupon is in compliance with this new obligation. You can click here to learn more about the Act.

At Groupon, we believe we have a responsibility to ensure that our business is conducted in an ethical way, and we actively engage to address social issues.  We realise that modern slavery is such an issue, and take seriously our responsibility to comply with the Act and to assist in preventing and combating slavery and human trafficking where possible.

As such, we are issuing this Modern Slavery Act Transparency Statement, which includes a description of our organizational structure, merchants and supply chain, efforts to identify and mitigate the risk of slavery and human trafficking in our supply chain, and information about how to report concerns or complaints arising under or related to the Act.

Groupon is part of a global e-commerce marketplace.  Groupon Inc. is the ultimate parent company of the entities that make up Groupon. Groupon Inc. is headquartered in the United States (Chicago, Illinois).

Groupon's merchants, vendors, and suppliers (together, “Merchants”) include but are not limited to:

Groupon takes a risk-based approach as part of our initiative to identify and mitigate slavery and human trafficking occurring in our supply chain:

Groupon, Inc. has put in place a Global Vendor Code of Conduct (the “Vendor Code”) that sets out our requirements for all Merchants who do business with or on behalf of Groupon, Inc.  This Vendor Code is displayed on all of the country-specific Groupon websites and is translated into our standard languages. It is also made binding on Merchants through our agreements with them.

The Vendor Code specifically states that Groupon, Inc. prohibits Merchants from engaging in child labour as well as any form of coerced labour such as slave labour, prison labour, indentured labour, bonded labour, and any other form of involuntary servitude. The Vendor Code also states that all Merchants are responsible for monitoring their global supply chains to ensure compliance with applicable coerced labour and human trafficking laws.

Anyone who has knowledge of an actual or potential violation of the Vendor Code is asked to make a report using the methods described in the Monitoring and Reporting section below.

Groupon’s UK Whistleblower Policy, which pertains to all employees, contractors, consultants, and agency staff who work for Groupon in the UK, provides information about raising concerns and complaints arising under or related to the Act, and provides methods for reporting such concerns and complaints, which are also detailed in the Monitoring and Reporting section below.

Groupon provides training to its employees regarding the policies and processes it has in place to combat slavery and human trafficking and the reporting mechanisms available to employees and non-employees to report concerns and complaints arising under or related to the Act. This training is provided to new and recently-promoted employees at a certain level on a quarterly basis, and every two years thereafter. The last such training was provided in October 2019.

Concerns and complaints arising under or related to the Act should be reported to the Compliance Team at legalcompliance@groupon.com or via EthicsPoint at gr.pn/ethicspoint.  EthicsPoint complaints may be made anonymously.

The Compliance Team will promptly investigate any concerns and complaints arising under or  related to the Act and/or the objectives set out in this Statement.

This Statement is made pursuant to section 54(1) of the Modern Slavery Act 2015 and constitutes Groupon’s slavery and human trafficking Statement for the current financial year. It has been approved by the MyCityDeal Ltd. Board. 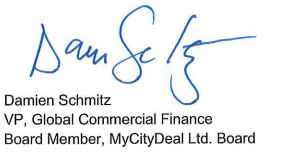