Tattoo Removal Glasgow - So You Want to Get Rid of Your Tattoo?

An increasing number of people are opting to get tattoos, which means a likely increase in the number of people who want to get them removed or changed. There are multiple reasons why you might require tattoo removal services- anything from changing tastes, to divorce. Whatever reason you are doing it, this handy guide with expert answered questions, will guide you through the process. I sat down with tattoo removal practitioner Andrea Catton.

Is it actually possible to completely remove all traces of a tattoo?

Cosmetic tattoos found on the brows, lip line and eyeliner can be harder to remove as they often contain iron in the ink. When iron-based inks are treated by the laser they may oxidize and go black and so they need several treatments to improve the tattoo.

Allowing appropriate time between treatments so that the skin can heal properly and the immune system can recover has also shown to give better results. 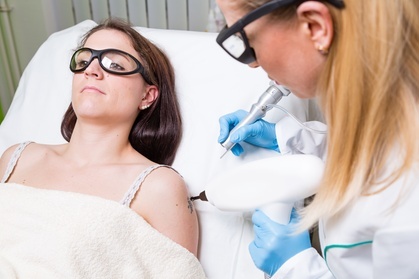 Some areas are harder to remove than others- wrists and ankles can be stubborn.  This may be because of the body's circulation and the blood supply to the area.  Skin colour can also play a part as darker skins need a gentler treatment as the pigment in the skin can also absorb the energy in the laser light.

If scar tissue is present at the site of the tattoo this can also have an effect on the removal of the tattoo.

What different methods for tattoo removal are available, and which is the most effective?

Using a laser is the most common form of removing a tattoo and done correctly, gives excellent results with only a small amount of trauma to the skin.  Other methods such as injections to break the ink down or excision have often left the tattooed area badly scarred.

Using the correct laser to treat the tattoo is very important as different lasers remove different colours depending on their wavelength.  The most popular laser for tattoo removal is a Q-switched Nd:Yag. Using a wavelength of 1064 nm, these systems are capable of treating black and white inks. Using a wavelength of 532 nm, red, orange, brown and purple inks can be treated with success. This laser will take around 10 – 20 treatments to remove a tattoo (dependent on the quality of laser) but is not able to remove green or blue inks as the green light it produces cancels out these colours.

The PicoSure laser being an Alexandrite laser using a 755 nm wavelength produces a red light so although it struggles to remove reds, it can remove green and blue inks beautifully!  The PicoSure also treats most other colours of ink with success and removes the tattoo 3 – 4 times faster than other lasers; often removing a tattoo within 4 – 6 treatments.  It is also able to treat those hard to shift tattoos that have plateaued with other lasers.

What is the actual process of tattoo removal?

After a thorough consultation, the process of laser tattoo removal involves using an appropriate laser – one that also treats the correct colours in the tattoo.  The ink shatters on impact when treated by the laser; allowing the body to dispose of the small particles through the lymphatic system.

Whilst the sensation of tattoo removal has often been likened to snapping the skin with an elastic band, it can also feel like the small splashes of hot fat that hit the skin when frying!

A slight whitening/frosting is seen, caused by gaseous bubbles forming in the skin.  This is always a good sign, as it shows that the ink is absorbing enough heat to affect the tattoo.  As the ink fades, this effect will become less.  It is also assists the operator in selecting the correct setting for the client.

Some mild tenderness and swelling is also expected.  Using a cool pack to reduce the heat is recommended; as is a proper understanding of aftercare.

It is also very important that the skin is your natural colour and free of a tan, as laser treatment can over stimulate active melanin in the skin. Failure to do this can result in hyper or hypo pigmentation.

Best Tattoo Shops in Glasgow (And Advice for First Timers!)

____
Browse our deals for tattoo removal in Glasgow.