Would you be brave enough to climb the O2?

In the past few years the O2 has transformed into more than just a place where you go to see your favourite band. One of the more recent additions is Up at the O2 which challenges you to climb over the 50 metre structure to see a great view of the London skyline.

There are lots of clever things you probably don’t know about the design of the O2. They’re things that I didn’t know too until the pre-climb briefing. Did you know, for example, that there are 12 big yellow prongs that stick out the top of it and hold the thing up because that’s how many months there are in the year? Or that the distance round the perimeter of the base is 365 metres because that’s how many days there are in the year. It was all designed around the theme of time, you see, because the Greenwich Meridian runs straight through Greenwich and it was built to celebrate the millennium.

These and more facts (I won’t spoil it for you) make you go ‘Oooh’ and ‘Aaaah’ while you watch the short briefing film, but before long you’re itching to actually set foot on the thing.

At your briefing you meet your climb guide who will escort you and the other members of your group (12 in total when I climbed) on the duration of your visit. After the briefing you’ll be kitted out with your safety equipment: a harness, some shoes and a jacket. It was warm and dry the day I climbed so we didn’t have to go too heavy duty with the kit. Once you’re all strapped in and had your harness checked it’s time to climb. 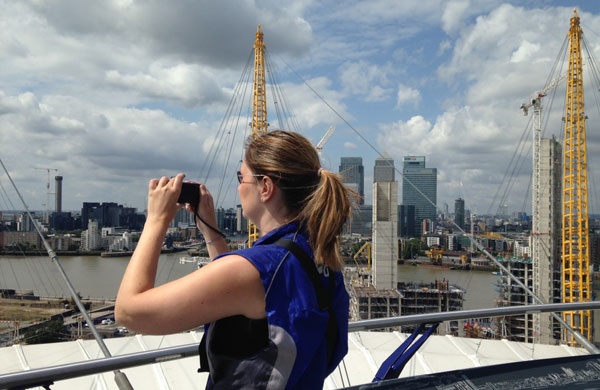 The first stage involves going up some stairs from ground level onto the structure itself. There’s also a photographer who comes along with you to get some snaps (they’ll offer to sell you these at the gift shop at the end of the climb). You’re allowed to take your own camera or phone on the climb for the all-important selfie, provided it fits in pocket of the jacket you’re given. But you’re not allowed to use it until you get to the top. Which is where the photographer comes in.

The climb takes you up a springy walkway which sits a few metres higher than the iconic canopy of the dome. You clip your harness onto a line and everyone walks up in a single line, stopping to catch their breath or look around at the view every so often. The walkway is a continuous slope (no steps) that gradually gets a bit steeper but isn’t too challenging. And before you know it, you’re at the top looking out over London.

There’s plenty of time to hang out, take a few photos and ask your guide questions about what you can see before it’s time to go down the other side. I suggested to the guide that they should make it a really big slide down into the Thames, but until the O2 takes my suggestion seriously you’ll have to go down on your feet.

You can climb up and over the O2 night and day, and if you’re feeling particularly flush you can even have a private climb. Tickets start at £26.

Find more adventurous things to do in London.