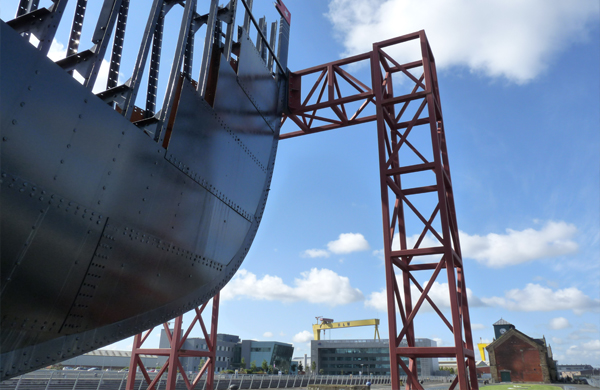 For many years in Belfast, no one spoke about the fact that we built one of the largest ships in the world. The feat of engineering that was the Titanic had many innovative and groundbreaking features on board but not a word was uttered about it after it’s tragic sinking.

Thankfully, those days of silence have long gone and now this part of our history is celebrated with the world’s largest Titanic experience: Titanic Belfast, the dry docks, the refurbished Nomadic ship and a number of tours. Here’s my guide to the ultimate Titanic experience. 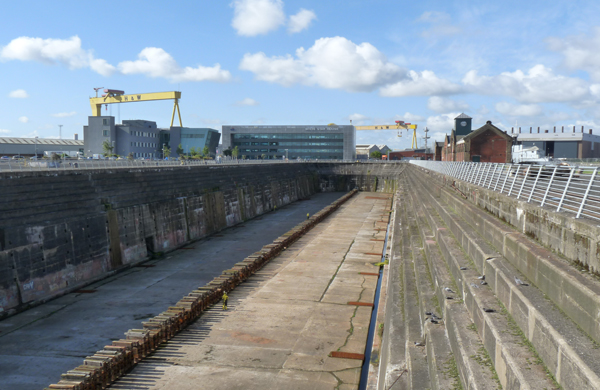 The whole docks area is packed with the shipbuilding history of the city. When you pass the Odyssey Arena, your first post of call should be the Titanic Kit. This structure sits just in front of the Arc apartment blocks and is a 13.5 metres Airfix model of the Titanic.

Next along the Titanic route is the refurbished Nomadic in the Hamilton Dock. The Nomadic was built to transport passengers from Cherbourg to the Titanic. Now fully refurbished this ‘mini Titanic’ is one of the gems of Titanic attractions in Belfast

From the Nomadic you will see the Titanic Belfast visitor attraction. Opened in 2012, the 100th Centenary of the sinking of the Titanic, this iconic building has become one of the most visited tourist attractions in Ireland.

Before you reach Titanic Belfast you can see the original drawing offices where the Titanic was designed. Tours are available of this historic building, just ask for more details in Titanic Belfast.

Beside this are the slipways where the Titanic and its sister ship Olympic were built side by side. The outline of both ships are marked by lights on the ground.

Along the same road you’ll find the Thompson Dry Dock and Pump-house, where the Titanic was moved to and kitted out with all its luxury. I recommend a tour of the pump house where you’ll discover some fascinating facts about Belfast’s shipbuilding history. Make sure you take the time and go down to the bottom of the dry dock and stand in the exact spot where the Titanic last stood on dry land. You can also visit a replica of the hull of the ship at the end of the pump house complex.

I would recommend two Titanic tours of Belfast with the first being a tour by Susie Millar whose great grandfather was a crew member on the Titanic. Susie will take you on a journey through her story of the Titanic while visiting some of the major attractions.

The second is the Titanic Walking Tour which takes in all the attractions I have mentioned on its weekend tours. You will learn some interesting Titanic facts on your journey to becoming a Titanorak.

Make sure you finish your Titanic journey in the city with a visit to the Memorial Gardens in the grounds of the City Hall.

Check out our deals for things to do in Belfast.