Under The Spotlight: The MAC Belfast

The MAC Theatre Belfast, or The Metropolitan Arts Centre, to call it by its full name, is one of the new incarnations of theatre in a spell of frantic arts regeneration in Belfast. Many residents will know it by its previous incarnation, The OMAC, Old Museum Arts Centre. The OMAC was housed in a Georgian building in the city centre; just a stones throw from The Grand Opera House. Its name alluded to the fact that the building used to be the site of the Ulster Museum and changed hands to a theatrical venue in 1990.

Containing two theatres, dance studios and three independent exhibition spaces the new MAC is a whole different animal. The OMAC was known for experimental cutting edge theatre; with a small venue there was the ability to be avant-garde without the pressures that go along with programming an ethos for an enormous arts centre. There was always going to be bated breath throughout Belfast to see how this would transfer, if it would become homogenised, focused on footfall and crowd-pleasers or if that edgy viewpoint could be contained and released to fill a wider space. 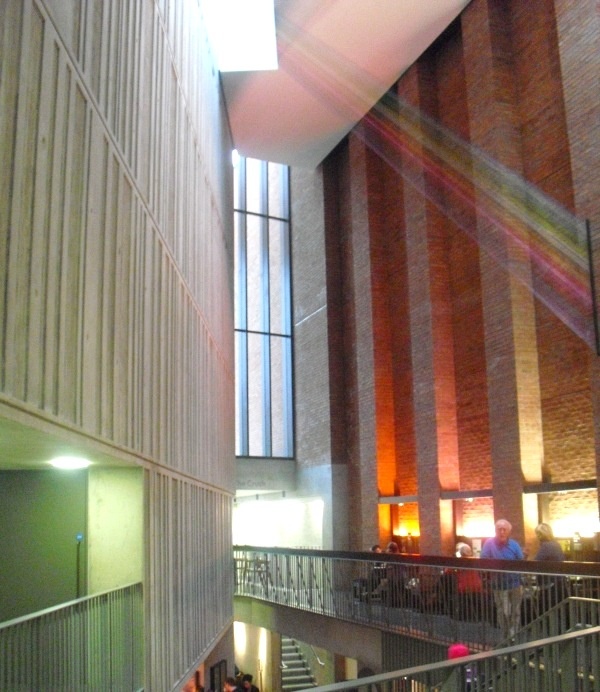 The MAC did fill its space though, and what a space. Patrons may know it for its distinctive tower which juts into the skyline mirroring the needle of St Anne’s. The tower is clad in black locally sourced basalt, and has recesses and linear ribs which work their way along the front and tower, cladding the building in an almost living shell, making the red brick frontages, a vulnerable underbelly to the building. The interior is an Escher style painting of balconies and exposed staircases, the long linear windows echoing the exterior and providing a shield to the outside world. The building removes the visitor from reality; the foyer is an especially odd experience, where one finds oneself almost in a covered street space, with the canteen style restaurant and bar, located galley style along one of the walls. 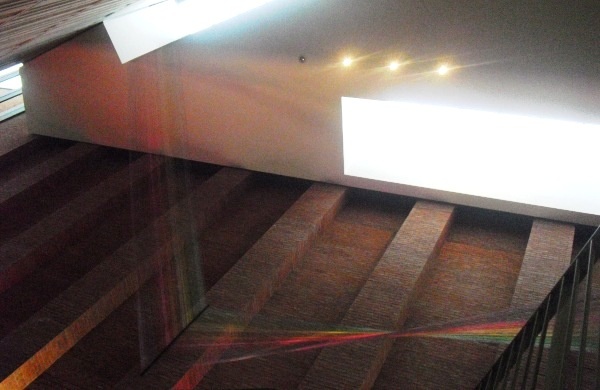 The main auditorium seems somewhat Salem-esque clad in black wood, with single rowed balconies which evokes the Arthur Miller play, perhaps somewhat co-incidentally. The space works very well for performance though, with blackout performances fully able to remove light from the auditorium and focus completely on the performer.

The programming has held onto the ethos that made the OMAC popular. It’s become the hipster twenty-something in the theatre family of Belfast, programming has featured Studio 54 event nights, Cabaret, Sweet Charity and Beckett’s Not I, Footfalls and Rockaby to name a few of the recent celebrated performances. The Robert Therrien monumental sculpture exhibition in the spaces was one of the most popular, with pictures abounding on social media sites of visitors standing at the gigantic table and chairs and engaging with the works.

It is a key stop to get some great food, or see a show situated in the new St Anne’s Square guests can eat and drink in a variety of locations, pre or post show. Call into The MAC and pick up a programme or see what is brand new in the exhibition rooms.

____
Browse our deals for things to do in Belfast.